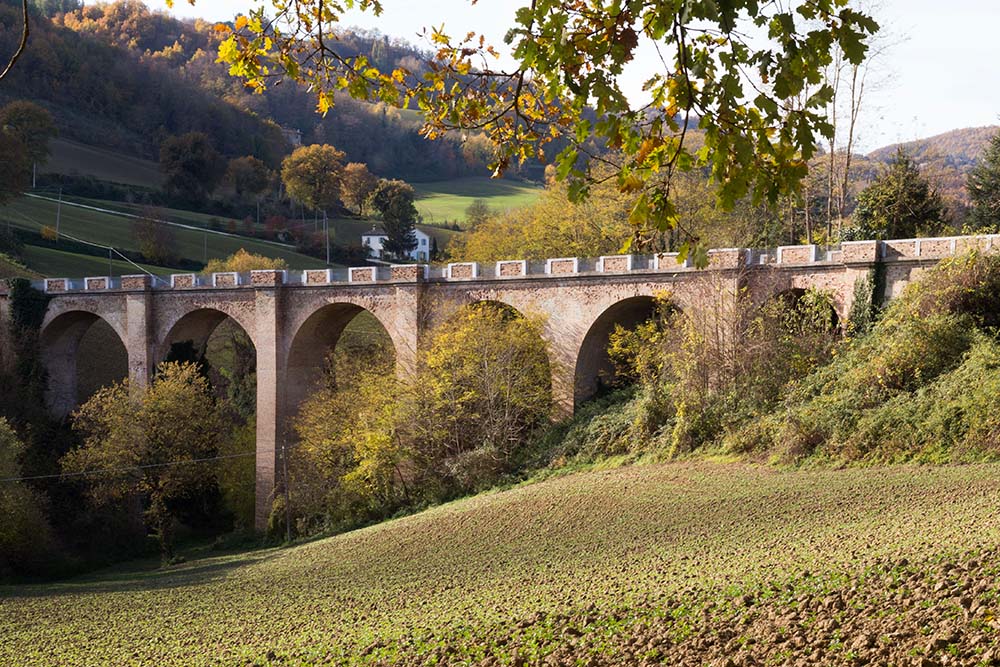 the railway from the coast to the ducal city and back, 48 km at the “electrifying” speed of 60 km per hour. The train used to start puffing early in the morning at the train station of Fano, to collect passengers stepping off the superfast train Milan – Lecce that was not usually on time. Passengers were leaving a crowded wagon, then were rushing to catch the connecting train, with its plain and cold wood benches and the vague smell of sanitizer, people would take their seats and then they would clearly hear the sound of the whistle and the dorrs would close. The train leaves and the trip in the past was beginning, with a typical composure of rural areas, slowly across the countryside: from plowed fields of the flatland on the side of the river Metauro, up the woods and high hills typical of the Duchy of Montefeltro. In those times, there was no smartphone, so you knew how to spend the time. You could simply look at the beautiful landscape, and it was a stunning experience, reading a book or chatting to your acquaintance. Passengers were usually a student or a professor, you could tell from the bag full of books and notes. There were students reviewing for the exam, and there was always – cannot say exactly why – a woman weaving. Winter was the most exciting season, you were leaving the coast in the rain and then going into the backcountry you would also see the snow. And it could snow very often in Urbino. It was so cold in the winter that the train was the best way to get there, without any stop along the way.

The most exciting section is still to remember with nostalgia – the last train was in 1987 – between Fermignano and Urbino: slope of 21% – 25% and the engine of the (sometimes diesel or even steam) locomotive would struggle along the climbing and bends, so that it would even slow down. Bridges and tunnels on the way, masonry works built using uniquely refined bricks from local furnaces, and that you can see today, you could see wild woods with hares and roe deer running freely, while squirrels and buzzards were clearing the snow from the trees. Those were real poetry images! Snowflakes falling in a heavenly landscape was like being at the movies. Spring and autumn were like a color explosion. 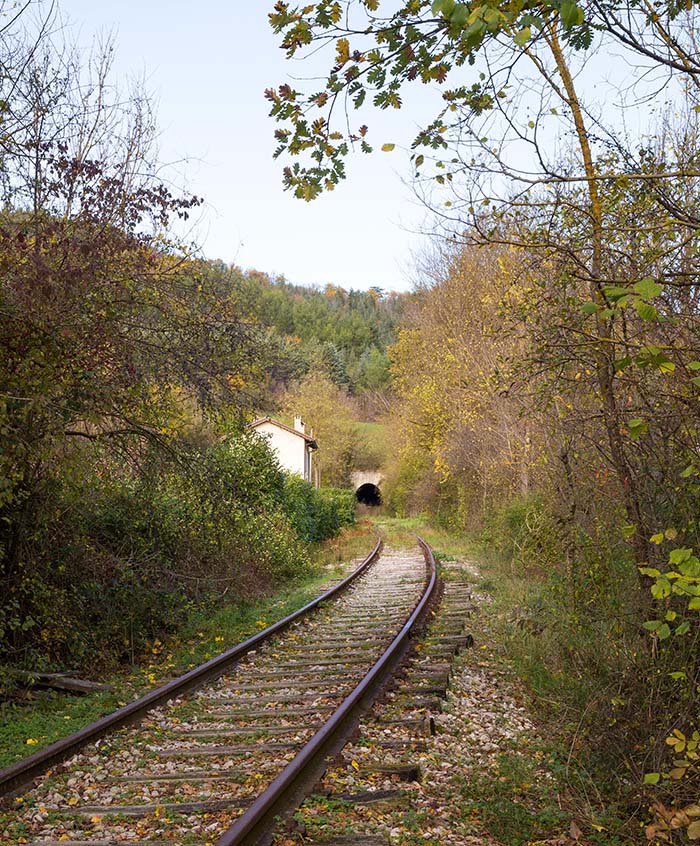 Passengers in that line would often stop chatting so that nature was expressing itself, they would free their minds and would imagine Captain Federico of Montefeltro and his army riding towards the city of Renaissance, coming from Florence or Mantua, and then in the end you would see the city walls on the background across the last bridge, Urbino, i.e. a ducal jewel. 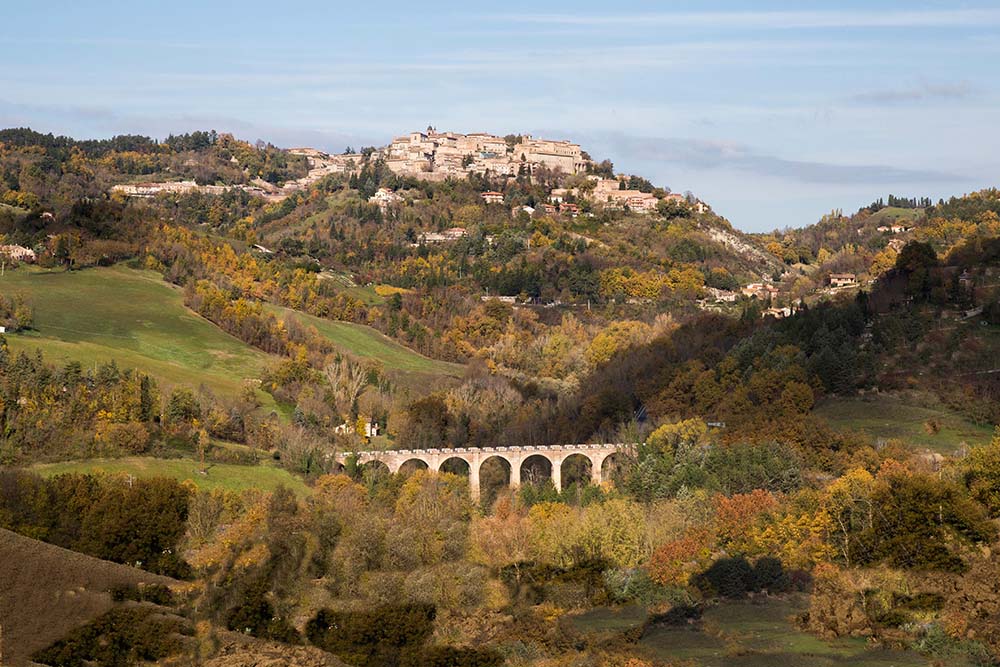 Now the railway line is kept in good conditions by an association that is working to have the line in function again. Let’s hope they succeed! 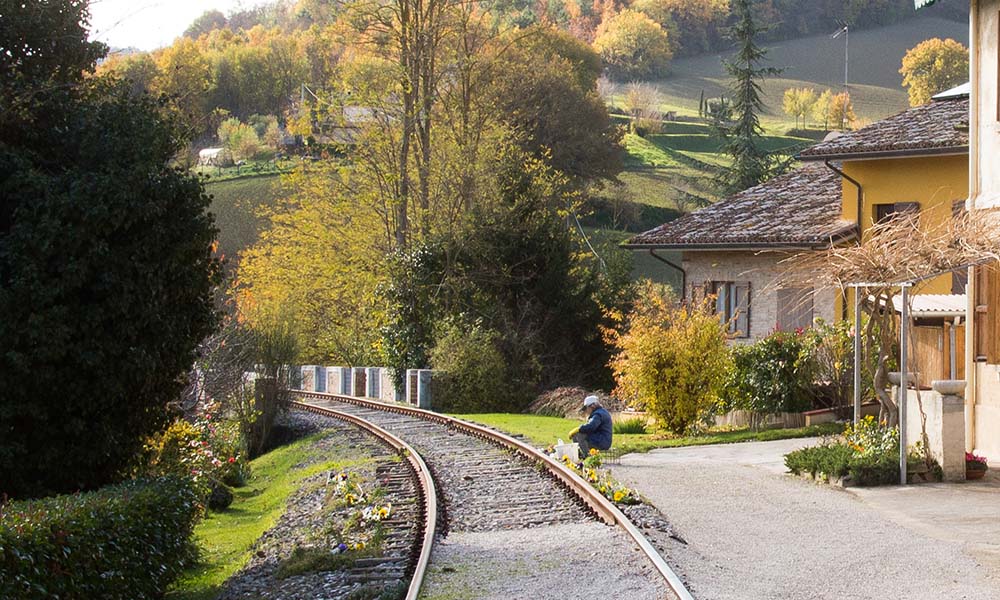 Pictures were taken on 18 Novemeber 2017 by photographer Giulio Gostoli and they show the line between Fermignano and Urbino. We were moved by the image of the woman planting flowers on the defunct railtracks. Local people are poets by nature!